First of all, there are less than 5% of us, Linux users, and our human rights are brutally violated by the state and the majority of Windows users who violate all norms of open source civilization. In our jobs we are forced to talk about how we’re working on Windows, as we have installed Office 2013, as we work every day in Excel and none of us dares to mention alternative and different software orientation.

When someone find about us that we are different from others, all pointing finger to us. I quote: “You fucking Linux monsters, go kill yourselves, lock down in your apartments and compile your sick kernel and work on Linux day-and-night and nobody will not say one word about you!”

Everyone know for the case when a Linux user has acknowledged his parents that he do not love Windows and have special feelings only about Linux and kernel…. first his parents thought he was joking and then they thrown him from a computer and doesn’t gave him to return back and re-install “it”

And the our state is mocking us… “we support your rights” and patting us on the hardware with the word “we will consider”, but in other hand…they signed VLSC contracts with the “normal” operating system and buy a new license for their own purposes? No…really?

On every step our rights are at risk, abused by bloody ban, we can not walk down the street with a laptop with Tux sticker, we were forbidden access to the sports and religious events because it doesn’t allow anyone to enter with a laptop that is running the free operating system (free is now good, of course, please buy a licenses), and we are forced to have a dual-boot and prepare we are Windows-wannabe society and in public we boot into Windows to look normal to others.

Best of all is that people don’t know that every Windows user have a hidden Linux user inside of brain, people simply refuse to admit to themselves, but Android phones, most websites, most servers are alive… thanks to Linux.

Our rights are threatened, and we want the majority Windows users accept us as we are and that we can in peace and without fear about the Windows firewall, we want to choking educate them every day and night about OpenSource and all media or public gatherings about how Linux is something normal and, yes, why not – better than Windows and how they should taste the same and to get acquainted with his software orientation. Let’s be realistic, when did you see on some moves that someone worked on Linux (please exclude Matrix)? There’s always the colorful Mac or Windows…and we with our 5%, where are we ??? 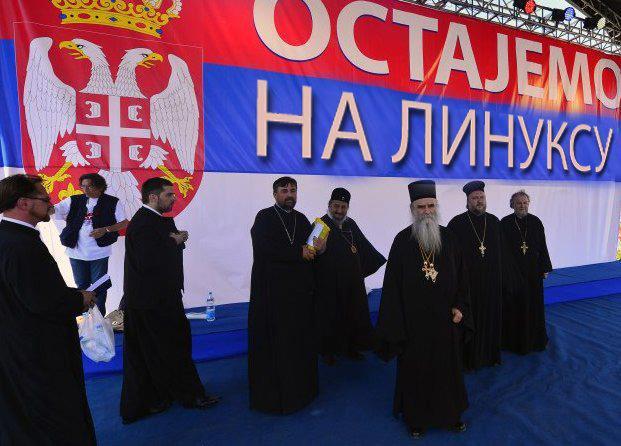 We stay on Linux | Photo by Cyber Wanderlust | Twitter

We don’t want a repeat of the violent scene from earlier Linux User Parade when hooligans throw Windows OEM stickers and Windows 95 floppy disks on us, threatened with system reinstall, beat us with Windows Updates and other ways humiliated us. We want the freedom to compile a kernel in public without fear of restarting our computer or BSOD’s.